Home » Travel » Exploring the Balearics’ quieter side, from Ibiza to Formentera
Travel

Exploring the Balearics’ quieter side, from Ibiza to Formentera

For decades, Ibiza has been perceived as a party island, with clubs like Pacha, Ushuaïa and Privilege famed for their all-day and all-night raves.

But that’s only half the story of this Balearic haven. Or actually, just one-third of the story, if you factor in the whole island and near neighbour Formentera, as I discover on a welcome break in the week both were added to the UK’s green watchlist.

Touring Ibiza, I learn that beyond the famed beach clubs, nightlife and pool parties of Playa d’en Bossa in the south and San Antonio to the west lie a wealth of other Ibizas.

In family-friendly Santa Eulalia, on the east coast, I watch toddlers squeal with delight as they paddle calm waters and, later, scoff down calamari and pizza in family-run restaurants where staff keep watchful eyes on them as they tear around. And on the vertiginous north coast, Portinatx’s clear waters cry out to be explored via snorkelling and scuba diving, with landscapes so lush and exotic it’s said to have stood in for the South Pacific in the musical of the same name. 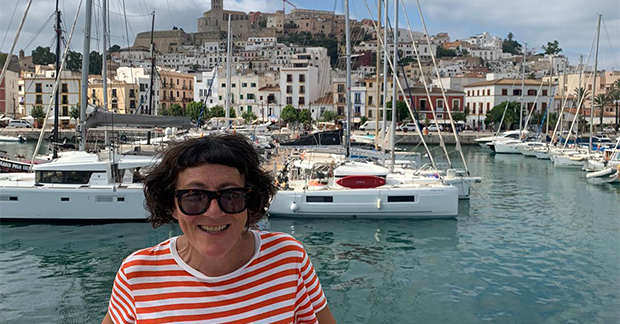 Back down south, island capital Ibiza Town is a pleasing mix of tourist-facing and workaday areas. Dalt Vila, set high among the ramparts of the old town fort, is all white-painted, blue-woodwork houses with washing strung across cobbled streets and bougainvillea bursting with bright pinks and purples.

Boutiques filled with elegant ‘holiday wardrobe’ whites and colourful beaded kaftans – the latter wouldn’t have looked out of place on the hippies who popularised the Balearics in the 1960s – lie cheek by jowl with preposterously pretty restaurants. They include La Dispensa and La Brasa, determined to outdo the bright bougainvillea with colourful crockery and glassware.

One of the best things about visiting Ibiza at the moment is the sense that Covid is a long way away, but that doesn’t mean the authorities aren’t being careful. Forms and test certificates are rigorously checked at the airport, where the entry process is smooth and quick, and indoors, everyone wears masks, with temperature checks and hand sanitisers de rigueur. But because so much of life here is lived outdoors, it’s easy to forget the pandemic. 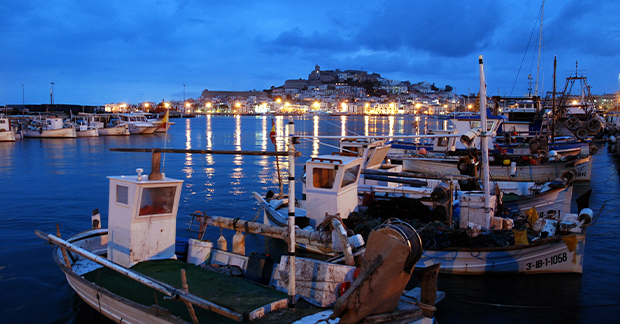 That’s even more the case on neighbouring island Formentera. Just half an hour away and connected by frequent ferries, Formentera’s 43 miles of coastline are filled with white sandy beaches that stretch for miles, often broken up by little more than small-scale, low-slung hotels, thanks to a far-sighted policy in the 1960s tourism boom that banned high rises and resort-style complexes.

A network of more than 60 miles of cycling paths across 32 ‘green routes’ is so enticing that I hire an electric bike and head out from the sweet harbour town of La Savina to discover pink saltwater lagoons, the Tulum-like white sands and impossibly clear aquamarine waters of Ses Illetes beach, and the pretty town of Es Pujols. Here I charge up my e-bike, revelling in the old-school feel of the town beach.

Despite a restorative lunch at the gorgeous Casa Pacha Formentera’s beach bar on Migjorn beach, the vineyards of Cap de Barbaria and spectacular El Pilar de la Mola are beyond my weary legs. With the island’s growing push for sustainability, though, including a car quota that drops every year, I know I will return to cycle to them on another visit.

Back in Ibiza, I find that the normally pumping bars and beach clubs of San Antonio and Playa d’en Bossa are unusually calm. But the effervescence and optimism of their staff – and indeed that of everyone I encounter – is undimmed. I board my plane home, buoyed by that positivity and utterly charmed by my two-island break. 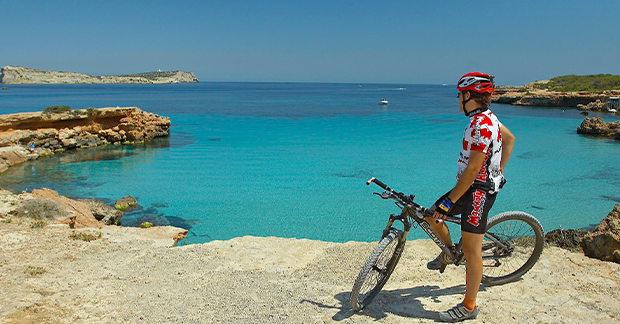 At the time of going to press, travellers to the Balearics must:

❂ Take a lateral flow test before returning to the UK. Some hotels (including all Palladium Group hotels) offer pre-booking and on-site testing, with results emailed to you.

❂ Complete and show passenger locator forms at both borders. Find them at gov.uk and spth.gob.es.

❂ The Balearic authorities will cover the cost of quarantine in designated hotels and new flights for anyone who tests positive during their stay. For the most up-to-date rules and information, visit: safetourism.illesbalears.travel/en 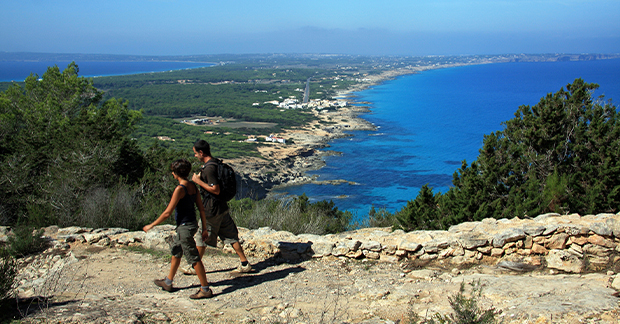 This expansive and family-friendly five-star all-inclusive offers a huge choice across its 850 rooms, along with three pools, a spa, well-equipped fitness centre, sports bar and range of dining venues including Italian, Mexican and the beachfront Portofino. Nightly rates from £276. palladiumhotelgroup.com

This playfully stylish hotel, with a name that’s world-famous for its party credentials, comprises 415 rooms set across the Ushuaïa Tower (quieter) and the Ushuaïa Club (set by the pool). Both feature design-led rooms that are spacious and luxurious. Nightly rates from £401 including breakfast. theushuaiaexperience.com

Jet2.com is flying daily from Stansted to Ibiza until September 20, then four days a week until November 1. Flights to Ibiza are also available from Bristol, Belfast, East Midlands, Birmingham, Leeds Bradford, Manchester, Newcastle, Edinburgh and Glasgow over the summer. jet2.com

Jet2holidays offers a week’s all-inclusive at Grand Palladium Palace Ibiza Resort & Spa from £1,199 per person based on two sharing, including transfers and flights from Stansted, departing September 25. jet2holidays.com