Picture this: A luxury cruise agency launching during the first – and arguably the most severe – lockdown in July last year out of a garage.

Each week, three of the Panache Cruises’ 15 staff would generally rotate, commute and work in the makeshift office space alongside the agency’s founder and managing director James Cole.

With an exercise bike propped up against a wall and sat on garden chairs, the team secured more than 300 bookings – worth more than £3 million – over 12 months.

This month the company moved to nearby Strawberry Fields Digital Hub in Chorley, Lancashire, as it completed the next phase of its long-term expansion plan.

The switch to the new premises has been partly funded by Lancashire County Council’s business finance scheme Rosebud.

Reflecting on Panache’s first office, he tells Travel Weekly: “I know there was a lot of positivity around Microsoft Teams and Zoom but I’ve never bought into [suggestions] that we wouldn’t return to offices. It’s quite a nice garage and it had some desks in there.

“Offices will never be the same again, but I always wanted to be in an office. It was always part of the plan. In the garage, there was space for about four of us to work – most people were working from home. I am fortunate that there was a new toilet and a sink in there.”

In 2018, Cole decided to leave his position at World Travel Holdings UK, where he had co-founded Cruise118 10 years earlier, to pursue other interests.

He says he is “exceptionally proud” about creating the three businesses at World Travel Holdings which employed nearly 200 staff, and stays in touch with “a number of people” at the firm, which is a five-minute drive away, having lived in the area since he was 11. 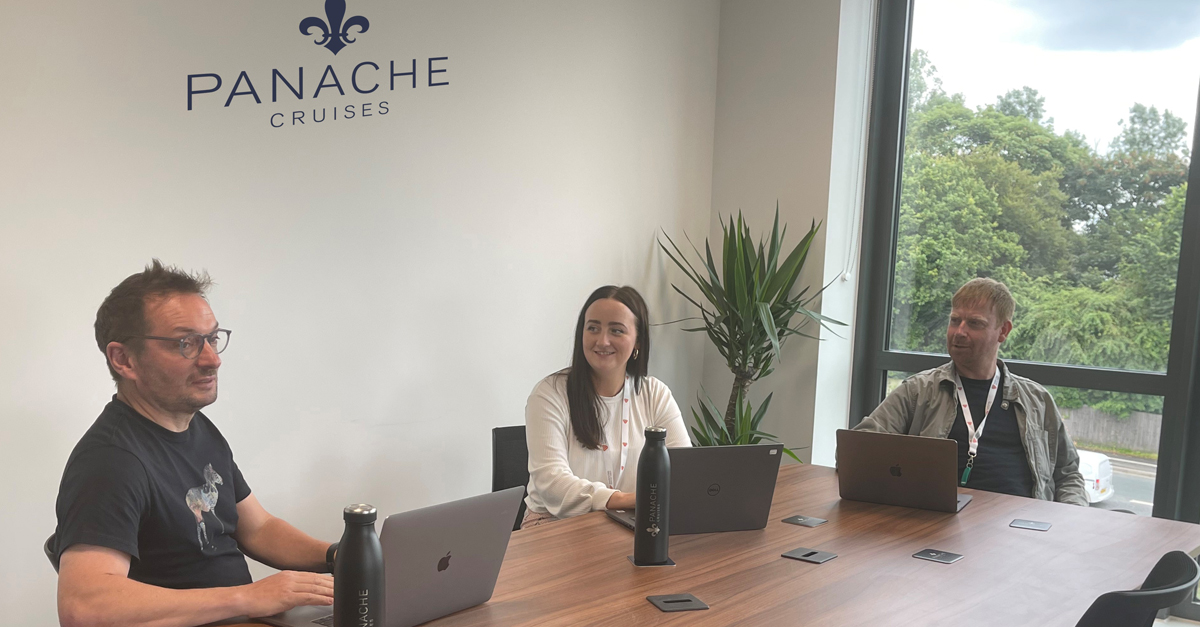 Panache Cruises ‘soft’ launched in May last year with the aim of building its customer database from scratch. Today, the business has more than 20,000 potential customers in its system.

“We started with social media channels,” explains Cole from the business’ new office space. “All of the communication with customers is on a digital basis.

“They’ve come from a mixture of social media channels, Google, Bing and working with third parties.”

Despite the number of new customers, Cole reveals that his parents were the first people to make a booking with Panache – on July 6 last year – an Oceania Cruises sailing in South America departing in January next year.

“Cruise lines have given us feedback and said we’re providing them with cruise passengers that have cruised before but with mainstream brands.”

One couple has made nine bookings through Panache. “They’re typical cruise customers who want to get away and explore the world,” Cole says.

Currently, the sales team’s focus is 2022 and 2023 bookings. “Booking trends have fluctuated,” Cole says. “Right now, people are looking for longer duration, bucket list cruises that they might not have considered before.

“Europe and the Med are always strong, but we’re seeing demand for the Galapagos, Antarctica, Alaska, Japan and Asia. There’s big demand for special cruises.”

Cole admits that when the agency officially launched in July last year, the aim was to focus on “the niche and luxury side of things”.

“We see these four segments – ocean, river, expedition and yacht-style cruising – growing significantly over the next decade. We think there’s a massive opportunity,” he adds.

However, Cole believes it will be “a number of years” before cruise passenger levels return to what they were in 2019. “In the medium term we do see the luxury sector growing exponentially,” he adds. “There’s no doubt about it cruise has a great future we’ve just got to be patient.”

Despite the success of the past 12 months for Panache Cruises, Cole is measured when discussing plans for the year ahead.

“We’ve got to hope that we’re returning to a greater level of normality in 12 months’ time,” he says. “And cruisers are enjoying cruises all over the world.

“If we can achieve that then Panache Cruises will be in a great place.”